Drawing Anime Clothes – That One Guide 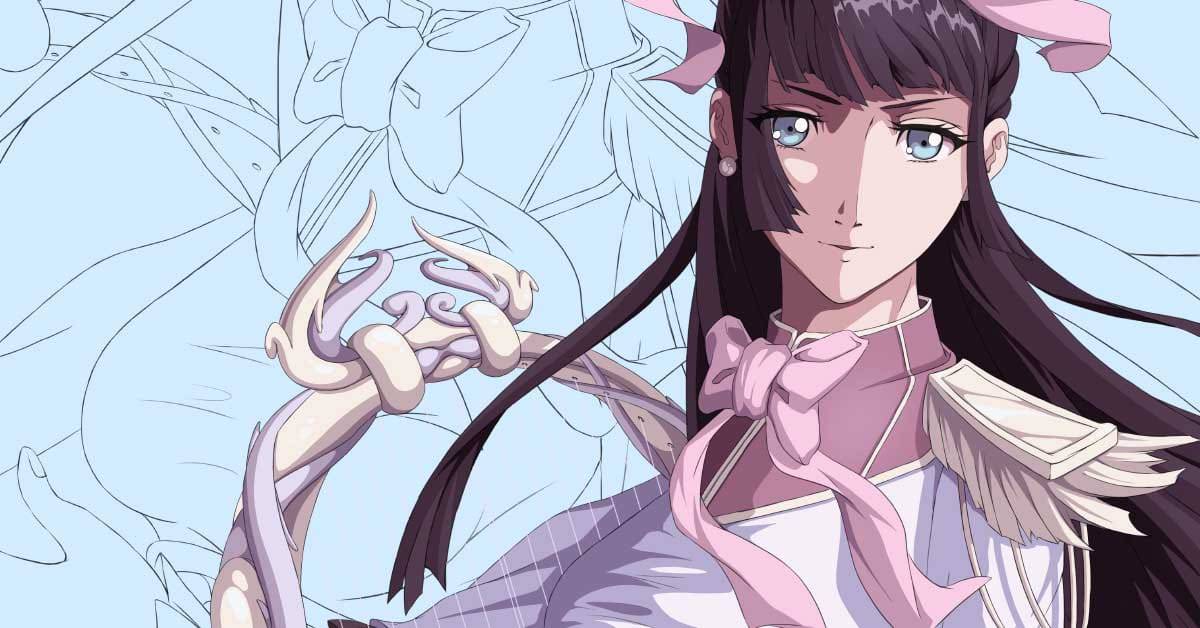 The example drawing (that I mostly use in this tutorial) is a harpist that is slightly inclined to combat. So you can think of this character as someone who is from the ancient world and has a harp as a weapon.

Whenever you are drawing clothes for an anime character, remember where the character is placed on? Time, culture, age, hobby, job, way of life. These are some of the most important things you need to keep in mind when drawing and designing clothes for your character.

So let’s get going and get deep on what makes clothes anime.

It’s weird, but I think there’s a certain style in place when drawing anime clothes. Like, the clothes are based on reality and all, but there’s this small twist in them. It’s hard to explain, so I do my best here.

When you think about anime characters and what type of clothing they use, it’s a bit different than what is thought to be normal. If you think about Dragon Ball Z, the clothes are very anime looking. Right!

And if you think about Akira, Code Geass, or My Hero Academia, there’s this certain fantasy flavor in them. They look like they could be real, but you just know that they are anime clothes.

So how do you create these? How do you actually draw them?

So let’s tackle that then.

Below is an example image of an anime character I designed. As you can see, the character has this ballerina-like pose. And when we have this kind of pose, a suitable outfit is something very gentle, fragile, and elegant.

I like to keep the flow there, and I think THAT is the thing that makes anime clothes look like anime clothes.

Clothing that lives! I think that is the very essence of drawing anime clothing the right way.

What to remember when drawing anime clothes

There are a few key things you need to remember:

As discussed before, you want to make the clothes support the character. Think about Darling In The FranXX anime series.

The character has a very military looking outfit, and when you think about the character. The character is very stiff to the outside world, mysterious, but also very powerful. So the outfit has to support that character’s personality.

Related: How To Draw Zero Two – Darling In The FranXX

When you are drawing clothes for your anime character, it’s not so important to how to draw, but WHAT to draw. Make the clothes support your vision of the character.

When you’ve decided on the clothes, it’s time to tackle the dynamics of the clothes. With dynamics, I mean the flow and mood the clothes bring.

How the clothing moves and how it supports other elements in the drawing is essential.

If you think about the picture above, the hair is flowing with the wind, but so is the ribbon and the skirt. So, the whole character is moving as the clothes are moving.

Remember that anime clothes kind of has their own lives. Neon Genesis Evangelion is another brilliant example of how clothes look anime. The suits the characters are wearing fit to the world they are living in and the world supports that kind of clothes. It all works together, world and clothes.

Even from a distance, you could easily say that they look anime clothes. And it’s only because of the way they are drawn look so anime. Subtle details that distort the realism out of place and replaces it with the anime world.

In the image above, I used a strong contrast between the hard metal/gold chain and the sweetness of a ribbon to create this anime clothing come to alive.

How to color anime clothes

Here are my best tips on how to color anime clothes:

In my example drawing, the character is elegant, maybe even royalty, so the coloring has to match that personality but also the design of the outfit.

How to draw anime clothes for male characters

Drawing clothes for a female/girl or a male/boy follows the same principles. It’s not so much about the gender of the character, but more of the material and texture of the clothing.

However, if we like to go a bit further with male clothes, I would say there’s this slight strength in them. Male anime outfits are usually slightly masculine compared to female outfits or clothes.

The clothing can also be a bit more rigid and have darker shades than female clothing. However, I wouldn’t limit the options male anime characters can have for clothing.

Whereas male clothing can be seen as rigid, I would say those drawing cute clothes is at the other end of the spectrum.

Cute clothes can be seen as gentle, fragile even, or just plain cute. What makes things cute is color choices, the way the clothes are held, and the facial expression the character is having.

Funny skirts or skirts that look like animals tend to be cute. But what also needs to be thought out is the way the clothes are presented and something that affects this a lot is the characters pose.

Related: How to draw a cute anime girl

How to draw folds in anime clothes

If we think about a shirt, jacket, pants, or any other clothes imaginable, there will be folds in them. The folds are created by your character’s limbs.

If you think about your shirt or pants you are wearing, and you bent your knee or arm, you can see how the folds get created.

So how do you draw them?

You USE REFERENCE images. It’s nearly impossible to know exactly how folds actually work if you don’t have a reference image available.

If you look at the image above, you can see how the folds work when the arm is at a 90-degree angle. What is so nice about creating art is that you can use imagination and realism together to create something new.

So do not just accept things as they are but create something that hasn’t been seen before.

Drawing anime clothing is not an easy task by no means. But the very best advice I can give is to draw the clothes as they live. They have a personality in them. They are slightly in the fantasy world but still connected to reality and to our world.

The anime world is full of possibilities, and the exploration is endless, so I wouldn’t like to restrict your imagination too much here.

Have fun with the designs, gather a lot of reference images, Pinterest being one of the best places for that. I, for example, gather new reference images at a steady pace, so you might want to follow my boards if interested.

Whenever I start to draw clothes for my anime character, I make sure to have plenty of reference images at hand. After that, it’s time to compile the ideas together and create something totally new but also something that looks anime.