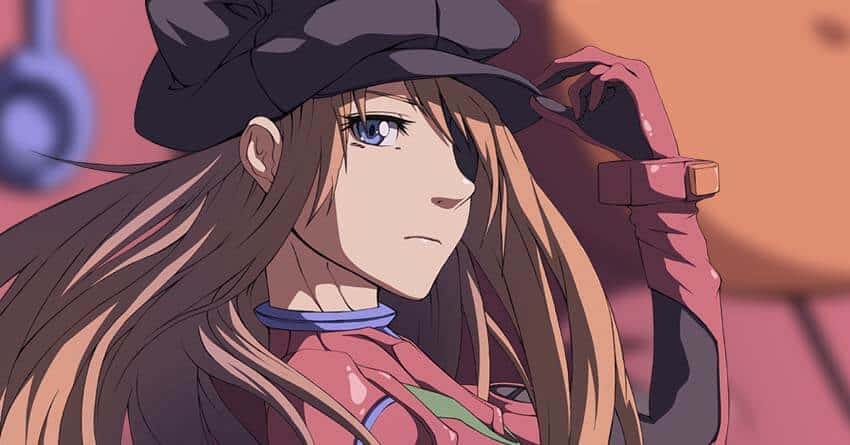 So there was a challenge or a contest of sort to draw Asuka Langley from Neon Genesis Evangelion anime series. I think it was a few years ago when I first wanted to draw this character but somehow just didn’t get to draw her.

This time there was a contest for it so I grabbed the stylus and went for it.

Now, I have watched a few of the Neon Genesis Evangelion movies and really do like the concept and idea behind it.

There is just something awesome with women + mechas that gets me. I don’t know. Maybe it’s the contrast between hard, strong metallic bodies (mechas) and soft, full of emotions (women). Of course, without the great set and world, these two things are placed is also damn awesome. Yes, I know there is Shinji Ikari. One of the main characters but this time I will focus on the women side of things as Asuka was the character meant to be drawn.

I remember when I first watched the Neon Genesis Evangelion – The End of Evangelion movie. I was like OK. Hmmm, this is pretty…weird. But on the other hand. It was very nicely drawn and made all in all. I like the action in it and the visual elements. One of the big things for me is the sheer imagination this series has. It’s definitely in its own world and also kind of wants to be there. Living its own life. Separated from reality.

Then again not too much. So that the viewer can somewhat relate to the world and its characters. But yeah, haven’t seen the series yet and most likely will never watch them. Just because the series is so massive in size. So for now, I will settle for the movies.

Starting to shape the idea

Now, I had a good starting point to this drawing as I had gathered a lot of references already a few years ago to draw Asuka. Now it only a matter of shaping that idea and decide which way to go. I liked the idea of drawing a hat for Asuka. So that was the path I chose. With it came the outfit.

Now I was on the fence of choosing to draw the jacket for her. But I just wanted to show the suit more (as that is just awesome in design). So I went with a hat and the suit.

Next up were the pose and the overall mood for the character.

By looking at the reference images, the hat was always presented more or less in a situation where Asuka is relaxed. So I couldn’t go for an action set and draw her in a fierce battle. Well, of course, I could have. We are artists and can pretty much draw things just the way we like. But I wanted to keep things calm this time, plus I didn’t want to draw an angry face. Even though I love drawing those. Not because I would be angry but rather the instant emotion it gives to the viewer.

Pose and feel for the character

So now that I knew I had to draw a rather calm and relaxed Asuka. I went for the reference images and looked for some ideas. until I felt like it would be cool for her to touch her hat. Pose ready. I tackled the face. Now, the face is always the most important thing you need to draw correctly. It is the first focus point viewer looks for. So nail that correctly. I experimented a lot with the face, eventually finding the right feel for her.

I could have easily made Asuka angry and determined. However, I wanted to give her a slightly different feel. So I went with thoughtful and kind of mysterious emotion. Like she was to look at you and be a bit worried about what is coming up.

That’s at least what vibes I get from her.

Sketch and quickly moving on

So with a quick sketch done. I moved to line art but this time. Made with a quick method. Kind of like drawing the line art in a way of not so precisely but still maintaining clear shapes. I also added a lot of thick lines and on the other hand, made lots of thick lines. This created a varied line art. Giving motion to the drawing.

This is something totally new to me but something I will definitely visit again. Using halftones. Now, I hadn’t use halftones before this drawing but have always loved the style and feel it gives to drawings. It is used in manga series for printing purposes. You can read more about manga and anime here. Kind of like the differences. So even though I did the shading first as can be found from the video.

I went and colored the drawing with halftones. Now, I’m no master at using halftones so one could say I used those wrongly. Sorry about that. Anyway, I did my own little coloring with those and really liked the results.

So even when I was happy with the results that halftones gave me. I still wanted to create the drawing in my own cel shade style. I had done the shading, so it was only adding those colors correctly and creating the final mood.

I used this cool blue and shades of violet to get a cold vibe for the drawing. While still introducing warm to the drawing with warm base colors.

The thing I love about cel shade is the simplicity and effectiveness of it. I mean, it is precise (which I like) and the shapes are clear. It also takes into account the line art efficiently and really brings everything together in a way that is clear and easy to read every time.

So all in all this was a fun contest even though I honestly don’t like too many deadlines. Maybe that was the reason I gave like a whole month’s time to draw Asuka. So there would be like zero percent of pressure. I truly think unneeded creative pressure and stress are some of the biggest enemies of an artist. Luckily I have a certain process for creating artworks. That truly helps me in producing artworks at fast pace and meeting deadlines way before they arrive at my door.