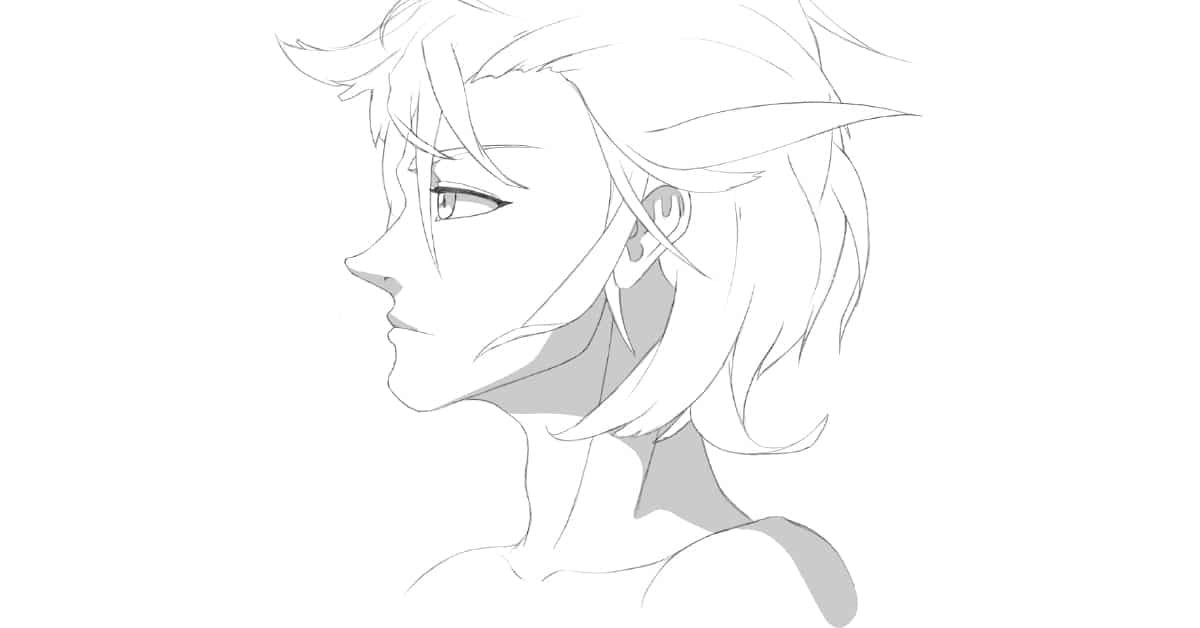 If you want to follow this tutorial via video, just check the below video:

As the first step, we will draw the eye. I draw the eyelashes, usually starting from the left side and then go down to the right side. Since this is a male character, the eyelashes will be kept pretty simple because if you draw too many, it will start to look like a female’s eye.

Then you just connect the eye with the lower eyelid. Next, we move on with the iris, but instead of going straight down, you will draw a small curve. Then, the pupil.

Next, we start to draw the nose and the forehead. I don’t have any exact measures of how or where you start the bridge of the nose and forehead, but you can always correct the lines later on if a feature seems out of place.

Then I start to draw the bridge of the nose going slightly outward. Remember, you can always correct the lines, later on, so don’t be afraid of making mistakes.

Also, there are no clear rules on what way to draw the bridge of the nose. Usually, however, it should go down and forward rather than up and inward 😉

Step 3: Draw Lips, Chin, And Shape Of The Head

Start to draw the lips following a downward curve rather than just drawing everything in a straight line. Next, follow the line and draw the chin.

As you can see at this point, the face is starting to form already. By the way, the bigger the chin you make, the more muscular the male face you are drawing.

Moving on to the neck, following the back of the head -line. Keep it subtle just to give a hint of what it could look like in the end.

Next, I draw the ear. It should be at the same level as the eye. I place it roughly in the middle of the head.

If you are thinking about what size of the ear you should draw, just draw what looks good to your eye because there is no right or wrong size when it comes to drawing anime ears.

Here then, you draw the jawline. At first, it is not very precise. So you can just sketch, trying to find the look of what it potentially may become as the final result—just feeling how it should go or how it could go.

What we are missing now is the hair, so let’s draw some kind of hair for the character. I don’t have any specific hairstyle in mind, but I’m just drawing something that looks kinda rough or something.

I suggest you draw the hair on another layer so later on, if you feel like something went wrong or you want to change the size of the hair or anything regarding the hair, you can easily change it by just going to the hair layer and modifying that.

Instead of having to erase certain parts in the face or something else, you can just modify the hair layer, and that’s it. Easy.

As you can see, even though we didn’t have any rulers or guidelines or anything, you can draw an anime face from a profile view just by drawing the face and the eyes first.

Then, the skull and rest of the body. Whereas usually, people teach you to draw a circle first, showing you the shape of the skull and creating guidelines based on the circle.

You can also do it this way, and as you can see, it wasn’t that hard after all.