How to Draw Interesting Images 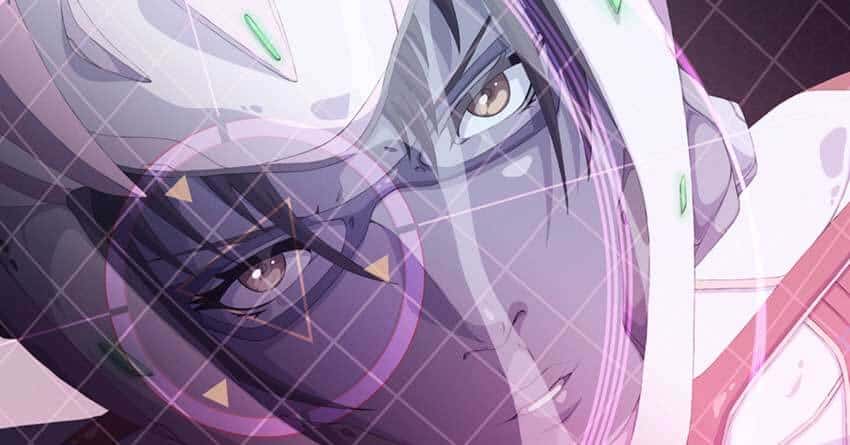 What’s up, guys? I thought about discussing what makes an image interesting and exciting and what makes it boring. So let’s get to it. 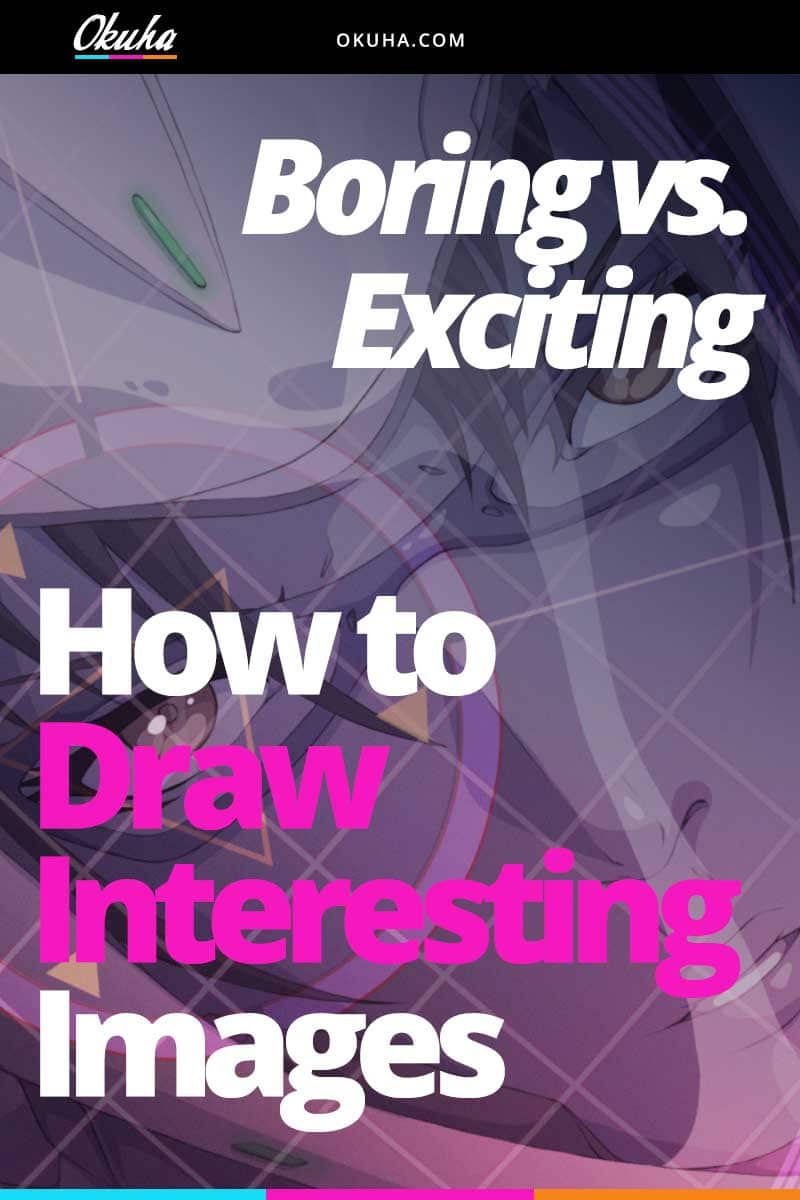 Starting to draw that image in your head

The starting point was that I wanted to create a portrait of a female facing straight to the viewer. There was this idea of hair flowing on the side of the face and creating a very centered structure for the image. Thought of doing a kind of highlight on the face, let’s say from a sun, and creating multiply layer mode for the other parts.

I thought the idea was good and the vision I had in my head was something that I would like to produce further. As a side note, I wanted to create a drawing with a female warrior crying of victory but feeling sorrowful for all the losses and fallen companions. Something along those lines. So it should have been an emotional piece. However, something else came out.

So I start with the sketch phase

As usual, I start with the sketching face, doing a rough sketch, getting those main elements in place, seeing that the eyes are looking good, the facial structure is correct or mostly correct. Getting a nice feel for the drawing and see that the eyes give you the feeling of sorrow. I guess the huge blobs of light in the eyes, emphasize the feeling of sorrow. Like the eyes were moisture or something.

Line Art phase of the drawing

When I moved to the line art phase, I quickly noticed that the overall structure and the image might not work. Like the hair wouldn’t work with the idea I had in my mind. I wanted the hair to be all over the place. I should have created a more structured hair. Like you see in the image, the hair is not fully completed. I should have drawn the left and right side completely and do some other solution for the far end sides. So the idea I had in mind just didn’t come through. For example the hair. It should have faded in the background but it just didn’t work out. The drawing started to look boring.

I added the confetti for the drawing, just to make it more interesting, something to look at. The viewer could see some kind of movement in the drawing. The hair is moving with the wind and so is the confetti. So I thought the movement could add the missing element.

Get on with the coloring, maybe that is the missing element

I like to do things quickly. First step being that I color the face and build up the image as a whole. Adding also the shading. Even though I like the actual shading part and the colors looked quite good, there was just something that seemed off-place and the image just didn’t work. I didn’t like the image. So I guess, the coloring wasn’t the thing. It did add elements to the drawing, yet again. However, it didn’t make the image more exciting.

I tried adding details. Putting lighting to those multiply layers. The sunshine effect on the face. Switching colors. Doing a different kind of coloring effect to the drawing, but nevertheless, the image just seemed boring. It wasn’t exciting, it wasn’t interesting. It didn’t have any story behind it. Or the story didn’t come through.

It didn’t have enough emotion. So even though I changed the colors a lot, I tried different effects to the image. It just didn’t make it interesting or exciting.

I did like the eyes though. A lot to be honest. I liked the face in overall and the forehead and the forehead’s bandana. The image as a whole, however, It just didn’t look good. So whatever I did for the image, it wasn’t working. So something was off and the vision I had in my head just didn’t come to a conclusion. I didn’t get that vision to the canvas and so I had to change the idea.

I wanted to keep the original face I had, the eyes and the facial expression I had in place. I liked those. So I didn’t want to ditch the parts that were working. The next thing was to find new reference images for yourself, to find something that you can use. You have a face now, but you don’t have good reference images. So the next stage is to find a reference image looking straight towards the viewer.

So in a way. This is drawing the same image again but with a different theme and with a different approach. This time making sure the image becomes interesting and exciting for the viewer to look at.

Compiling reference images for yourself

It took a bit of time to find a good reference photo, an image. However, when I found a good one to use. It was a much smoother progress from thereon. I had drawn the face already once. I just needed to put it on a new document and switch the position a bit, tilting the head and drawing a new kind of idea. The first thing I quickly noticed was that I needed straight structure for the face. I needed the face to be not in the center. It had those sides also so I could not leave those to be a blank canvas kind of style. It had to have elements. 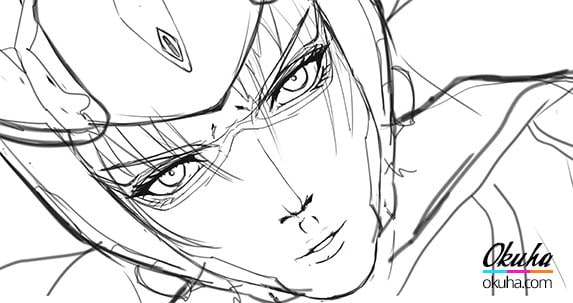 The new idea for the drawing

When I tilted the head I saw that the image was already more interesting. It had more kind of interesting view to it. There was a structure to make the viewer more interested in watching the image. You see. When he or she won’t notice the facial expression so easily.

Because the head is tilted a bit. He or she has to maybe tilt her or his head instead more to see the actual motion the character is having.

This makes the image that more interesting already. The face being tilted, kind of forces the viewer to inspect the image a bit more.

This kind of structure enables you to draw also the body a bit differently. As you can see. The image has a kind of viewpoint where the character is facing up looking at something and the body stays behind. 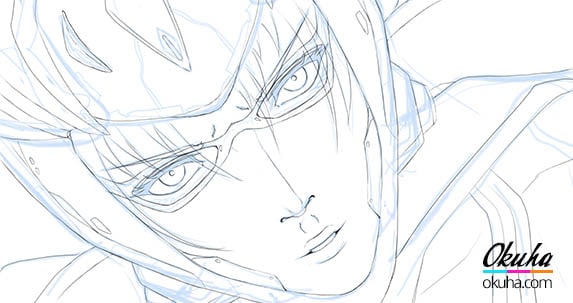 As we can see. What makes this image more interesting is that it has more elements in it. It’s not so typically arranged, it’s not so symmetrical. Even though it is. It doesn’t look like it because the overall viewpoint is different. Exciting isn’t it! 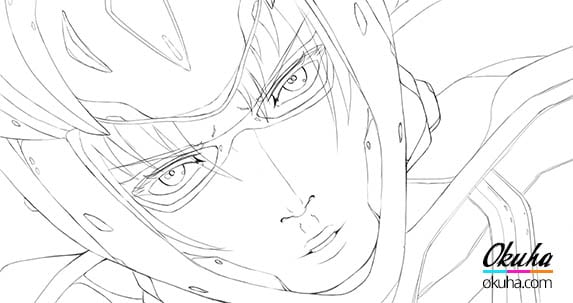 A better vision for the drawing and getting excited

I also had a vision of adding a background to the drawing and a foreground. I usually get quite bored with an image quite quickly. There has to be some kind of progress to the image to make it more exciting to draw. When I saw that the image was exciting. I experienced this flow kind of energy going through me and I felt like, Okay, this is something I love to draw to a completion.

What this means is the image might come together as boring and that is because the image does not have any depth in it. Even though you are drawing a character with a dynamic pose, let’s say, using foreshortening technique. 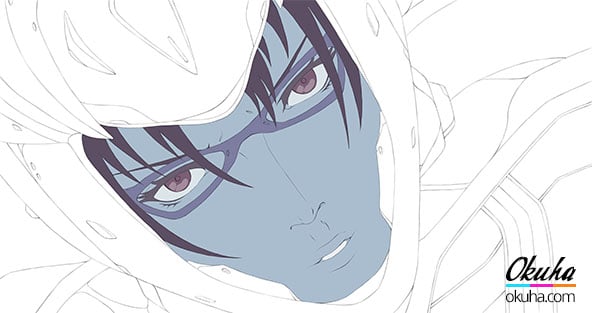 The arm is reaching out to you and the legs are falling behind and stuff like that. If you add foreground and background elements to a drawing like that, you instantly make it more interesting than the previous version you had. So adding elements to contribute the image creates an interesting image.

Now, I tried this by adding the confetti before. However, the base image was boring so adding elements to a drawing that is boring right out of the gate. Makes the image. Well, boring. Unfortunately.

I think the key to an interesting or exciting image is details. The way the image is structured, like the composition, color choices, and kind of the overall emotion of the character or the image give to the viewer. 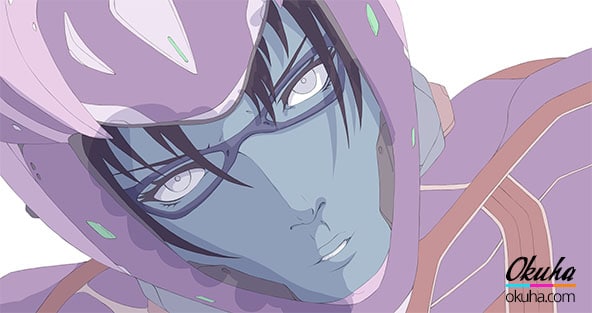 But as you can see from the first image I was creating, the ancient woman (female warrior) and the image I have finalized. Being this woman in a spacesuit of some kind, and the color choices, details, foreground, background, and the overall structure is extremely different. So even though I used the same approach here. Drawing that face looking straight at the viewer. By structuring the image a bit differently made all the difference. The face is still looking straight but the angle is different.

I think the image is working so much better, even though the actual idea behind it is quite similar, a woman facing straight to the viewer. When the viewer sees the image, the first thing would be kind of, “What is the situation she is in?” So immediately there is a story behind this image and that is all because you added some foreground and background elements to it.

If there was just a spacesuit, it would still be boring, like it needs elements to it. 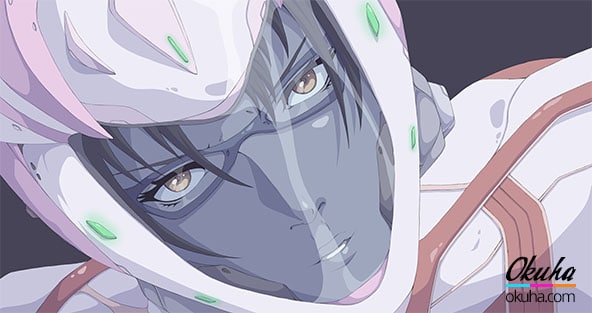 So do keep in mind that you should always add details and elements that support the main point of interest. Even though this is actually quite a simple image, there’s only head and the spacesuit. Then there are some overlay and spacy battle effects on the foreground. Some nicely placed shading and lighting and the few details here and there and you get an interesting and exciting image. 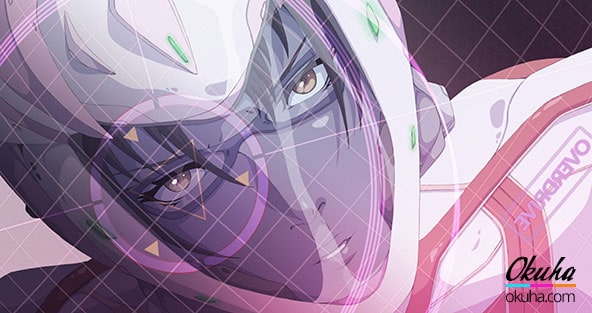 I hope this gave you new ideas on how to approach your artworks and how you can improve the interesting and exciting parts of your image. Thank you and I will see you again.