Is Manga Read From Right To Left? 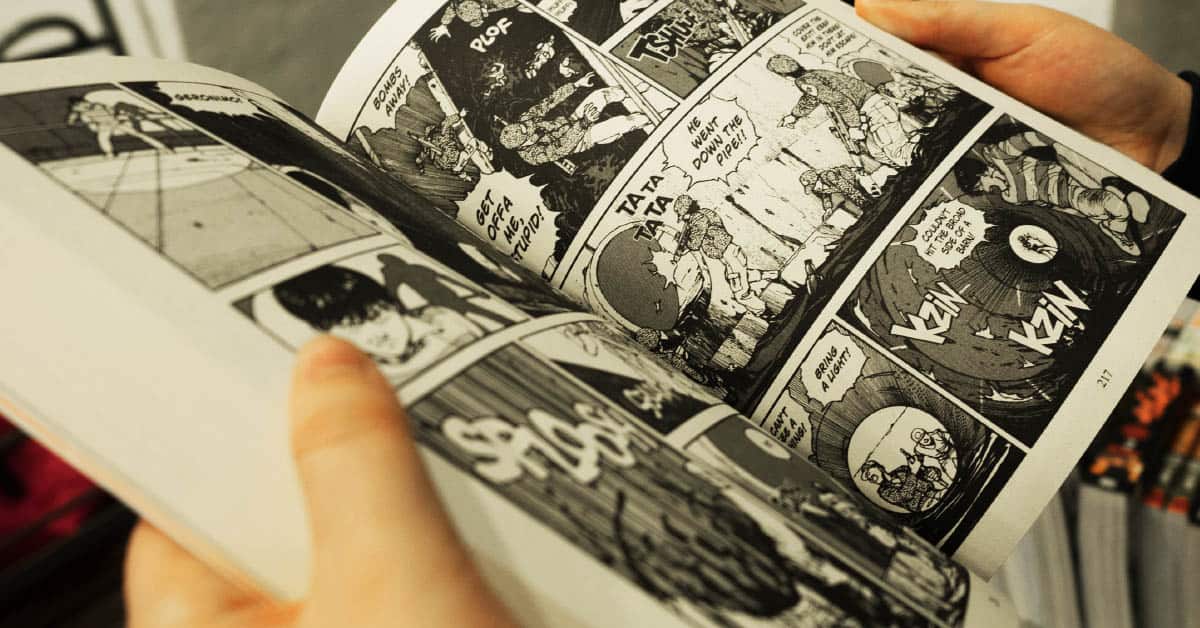 A lot of people want to get into manga but are not sure how to start. One reason for this is that the very act of reading manga looks complex and intimidating.

Is manga read right to left? And which page is actually the first page you should read?

You will find, though, that once these initial questions are answered, it is pretty easy to get used to this new way of exploring a page and getting sucked into a good story.

Manga Is Read From Right To Left

You read manga starting on the right and moving over to the left – basically the opposite of how you would do it with an English book. This does not only mean that you read the page on the right before you move over to the left page, but it is also true for the panels, which in manga are called koma, as well as for anything else that is included inside the koma, like speech bubbles, sound effects, and anything else.

To begin reading your first manga, place the book in front of you with its spine to the right – just as if you would put a book on the table backward, with the blurb on top, from a Western perspective.

In any case, you will notice quickly if you have opened it on the wrong end. Some manga even has printed warnings on the page that people commonly assume to be their first page, but which is actually the last.

After a while, you will get used to this direction of reading, and it is just another cool skill of processing information your brain has learned.

Once you have opened the manga on the correct page, the first koma you will have to read is on the top right corner of the page. You then follow the order of the panels right to left and top to bottom.

Some elements inside the koma that are there to display action and emotion, and, all in all, make the story come alive, are manpu, fukidashi, and gitaigo. Manpu are little symbols that express movement or emotions without having to spell them out – think of stars that signify dizziness or exclamation marks that make clear that a character is excited.

Another common manpu is a droplet of sweat close to a character’s head, which commonly expresses that the character is slightly embarrassed.

Fukidashi is the manga term for the speech bubbles or thought bubbles. Just as in comics, these are used when characters directly communicate with each other or when they have a thought that is clearly verbalized.

While fukidashi are clearly very important and often drive the story forward, a great portion of a manga is also told in simply the illustration and the manpu.

Trying to follow the story by only reading the dialogue does not make a lot of sense, and a big part of the joy in exploring manga is to understand the plot told in art and subtle expressions of emotion.

Another important means of expression are the gitaigo. Gitaigo are basically what in English are called onomatopoeic words – that is, words or phrases whose sound is at the same time their meaning.

Just think of the buzzing of bees, a word that, when you say it out loud, makes a similar sound to the one it describes. In Japanese, you have, for example, bata bata, which can represent the flapping of fabric in the wind or the sound of footsteps.

All these elements are read in the same way as the rest of the manga, from the top right to the bottom left. Mostly, they are centered around the person, object, or action they relate to, though, so this will not make your reading experience more confusing than it already is.

You will also find mangas printed in the Western way – that is, starting with the spine on the left and following the left-to-right order – to make it easier for readers not used to read from right to left.

The choice for manga printed in this way is smaller, though, and if you want to have the full variety of manga at your disposal, it makes a lot of sense to familiarize yourself with the Japanese direction of reading.

About half of the publishers that publish manga that has been translated into English include short reading guides to make it easier for you!

Why Do You Read Manga From Right to Left?

Manga is a form of storytelling that has evolved from a long background of Japanese culture and aesthetics and is, therefore, incorporates elements that are typical to Japanese literary culture, like the direction of reading.

The earliest Japanese scrolls with cartoon-like illustrations are from the 12th and 13th centuries. The word manga was first used in the late 18th century and began to be popularly used in its modern sense in the late 19th and early 20th century.

All in all, it is anything but a modern invention and has lots of tradition behind it! Because of this, it is also read in the traditional Japanese way, which is from right to left.

Since, in the Japanese originals, the writing inside the speech bubbles is aligned from right to left, it makes sense that the readers follow the same direction when looking at the panels.

And while translators, of course, translate the script and word order into English, it would simply be an unnecessary effort to also shuffle the panels around.

Do Japanese Read Books From Right to Left?

Yes, most of them are read from right to left, especially when it comes to fiction.

Non-fiction, on the other hand, especially academic textbooks, are often read from left to right, though.

This is for the reason that otherwise, it would be difficult to include mathematic equations and other scientific formulas written in the standard Arabic numerals, as well as untranslated quotes from other languages.

Why Do Japanese Read Backwards?

Originally, Japanese has been written top to bottom and then right to the left – instead of the horizontal lines, which you will find on the pages in a Western book, in old Japanese books, you would find vertical columns.

After the Second World War, though, this was changed to the internationally more widespread way of writing in horizontal lines.

Aside from the heightened contact with foreign languages, another reason to make the switch had to do with attempts to standardize the Japanese education system.

The old form of writing is still used on some occasions, and it is called takegaki. It is mostly used in more traditional forms of writing, like handwritten letters or high-brow literature.

The modern, horizontal way of writing is called yokogaki, and it is used online, in text messages, or when taking notes. There are no strict rules when to use which system, though, this is up for the writer to decide!

Graphic designers even often use both forms in the same project, when they, for example, want to make posters and adverts engaging and interesting.

When reading translated mangas, this is not a problem you are bound to encounter, anyway, since a translation obviously includes the word order of the target language.

Asking why Japanese read and write what seems “backward” to us would make as much sense as wondering why we write in a way that looks weird to Japanese or Chinese people – this is simply the way their writing system flows.

If you had grown up with the Japanese system, you would probably be wondering now why Americans and Europeans write “backward!”

As you can see, while mangas seem confusing at first, once you understand the logic behind their alignment, it will get easier to simply get used to this different way of following the events across the page.

To have a good first experience with manga, it is, of course, important to find one that really catches your interest. Therefore, it makes sense to spend some time researching and starting to look deeper into the different kinds of manga.

There are five main categories of manga:

These are, of course, highly stereotypical and broad categories, but they can still be useful for finding out what piques your interest.

Inside these categories, there are countless manga genres, so everybody can find something to their liking. Romance is a very popular genre, but so are adventure, sports, and slice of life.

A lot of people also have their first experience with manga when they check out the manga that goes with an anime series they already like.

This is a good start because knowing the story already will help you not to get lost in the order of pages and panels.